About the Robbins Family 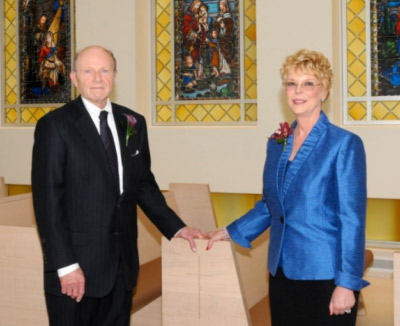 Bill Robbins is a Baylor graduate, having earned a bachelor of arts in 1952, a bachelor of law (LLB) in 1954 and a juris doctor degree (JD) in 1969. In 1971, he established the North American Corporation, which became the parent company of numerous other business ventures in the areas of consulting, investment, and the manufacture of oil and gas valves.

Mary Jo Robbins earned a bachelor of science in nursing (BSN) from the University of Texas in 1975. During her twenty-seven years in the nursing profession, she opened and managed ten dialysis facilities in Texas.

A Commitment to Baylor's Mission

Mr. and Mrs. Robbins have a deep sense of commitment to Christian missions, education and healthcare. They have put this commitment into action throughout the world, both personally and through The Robbins Foundation.

In the words of Mary Jo Robbins, "The Robbins Foundation mission is to tell the world about Jesus, educate and heal the sick. We cannot do this on our own, but we can help empower others to do this with our gifts."

In India, for instance, donations help provide a medical clinic and a school. In Canada, a major gift to MacEwan University was the catalyst that led to the creation of the Robbins Health Learning Centre, while another major gift to the Royal Alexandra Hospital Foundation and Capital Health created The Robbins Pavilion, a seven story, state-of-the-art building housing women's health and cardiology facilities, the Learning Centre and the Robbins Chapel.

In addition, the Robbins also support the Glenrose Rehabilitation Centre, the Edmonton Symphony and the Citadel Theatre and Academy.